Posted on March 14, 2017 by waymarkingthesketchbook

The story of the residency, including images and text outlining the residency are now archived in the Reactions tab (above). 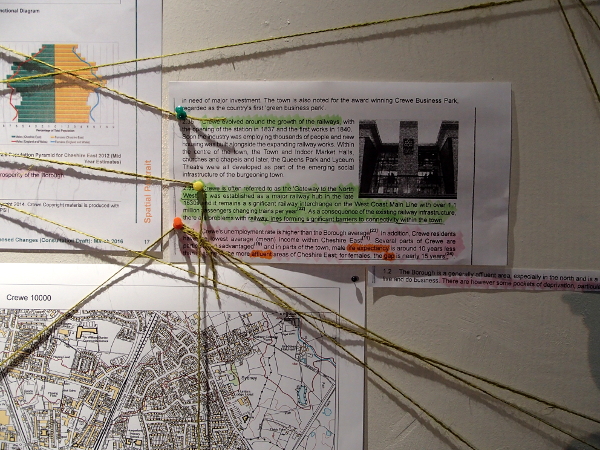 Image taken as part of the performance-installation Our Right to the City? (Image credit: Sarah Spanton)

Posted on November 24, 2015 by waymarkingthesketchbook

After a bit of a hiatus (for info go to: waymarkingthesketchbook) I’m still finding the act of capturing GPS data from walks I’ve taken interesting. Especially when layered onto a range of maps (from GPS Visualiser).

I enjoy seeing the grain and pattern of the streets, the shapes of the buildings, roads, public spaces, green spaces. And seeing how different maps present the same streets visually.

And of course remembering each walk, the paths taken, and seeing it plotted out. This was my first trip to Kopenhagen (April 2015), explored on foot for three days. Here are a some mapped visualisations of the walks. 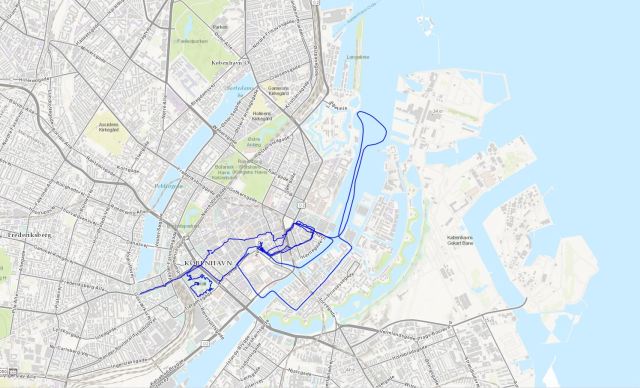 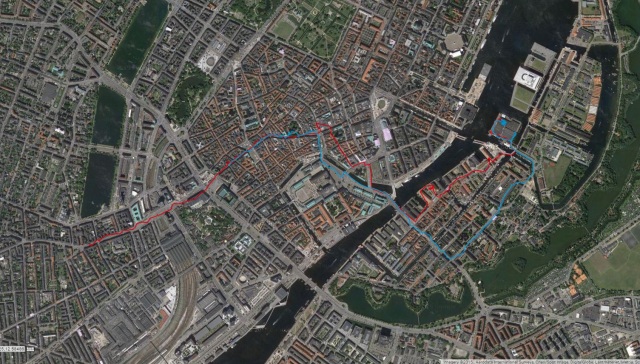 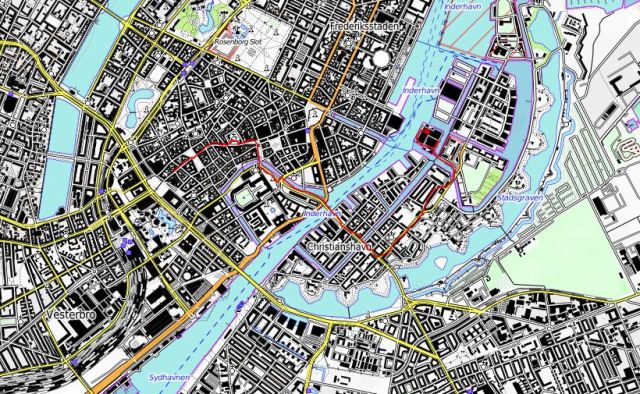 Posted on September 8, 2014 by waymarkingthesketchbook

Seams with fragments (2014) is the working title for a new installation which visualises, documents and re-presents a series of four walks which converged upon and passed close by to Federation House, Manchester and took place on the 27th August 2014. The final work will be part of the group exhibition Bed, taking place at Federation House, Manchester in November, more information to follow.

I love the dark grainy texture of these Yahoo satellite images of Manchester. 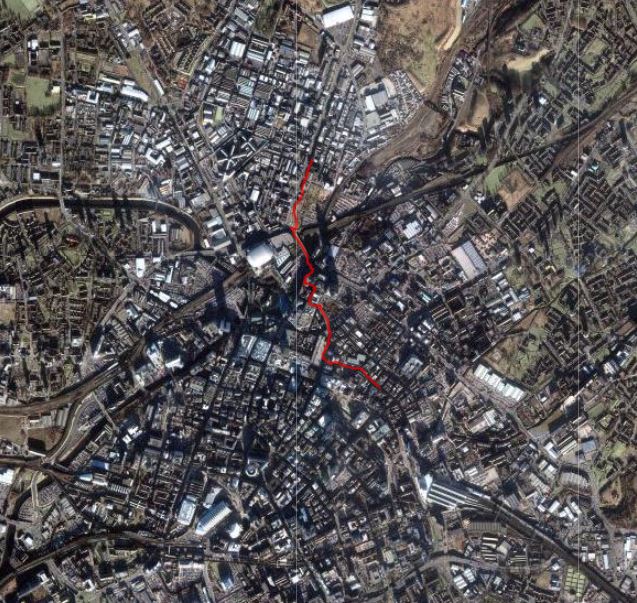 Posted on August 19, 2014 by waymarkingthesketchbook 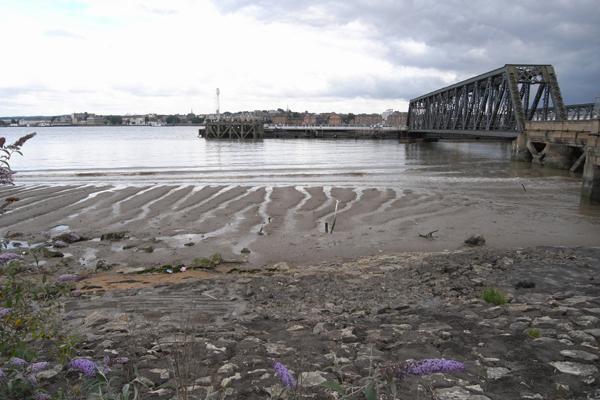 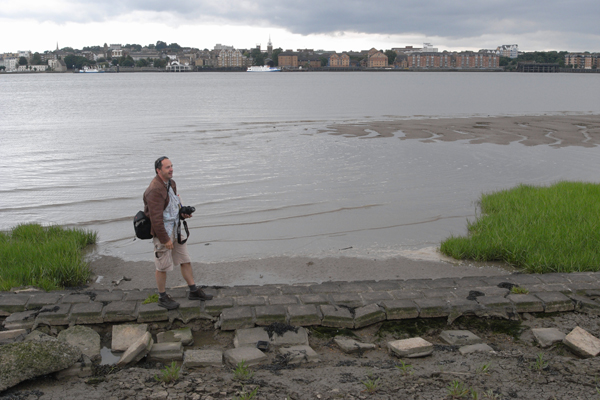 Posted on July 16, 2014 by waymarkingthesketchbook

On the 5th and 6th July this year I travelled down to London to take part in Detours2London.

Hosted by counterproductions director Charlie Fox, bringing a group of artists together to talk through ideas around the creation of an urban/semi-urban public trail led by artists in London.

As part of this, on the Saturday a small group of us (Daniel Lehan, Josée Dubeau, Sarah Sparkes and Charlie Fox) set out for Gravesend. And took the ferry to Tilbury, then walked the short distance along the rivers edge to the World’s End Pub and back again.

Here are some photographs taken on the walk, and some GPS track maps. 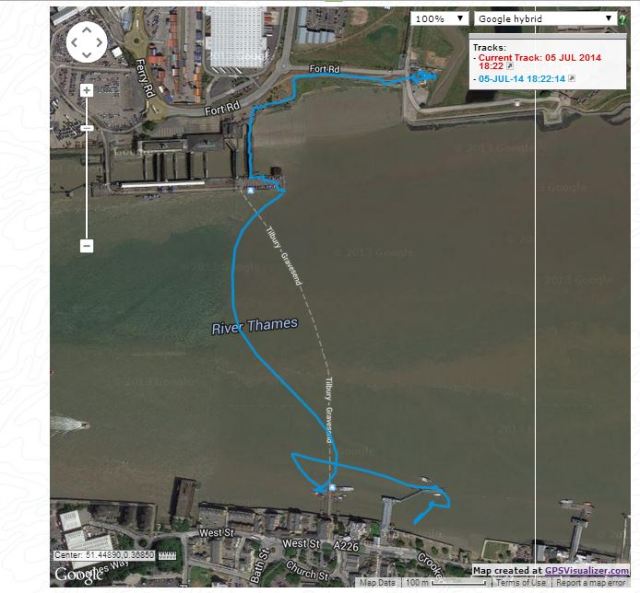 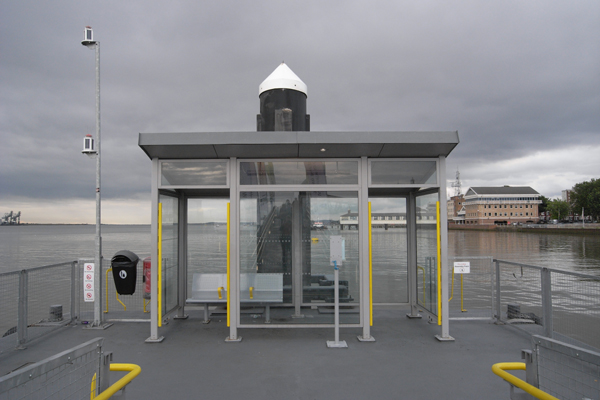 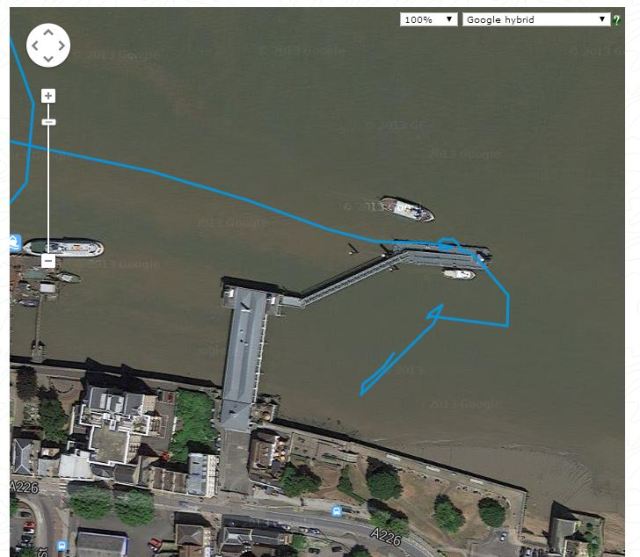 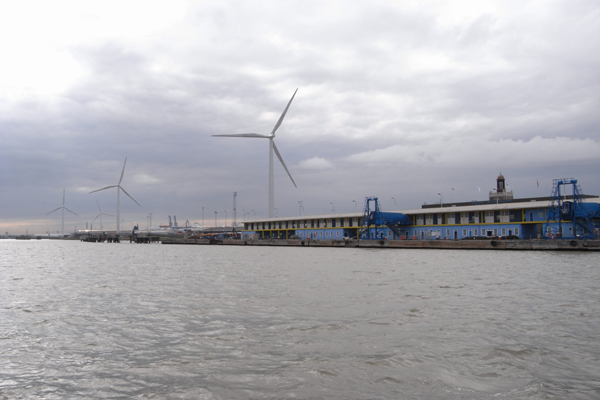 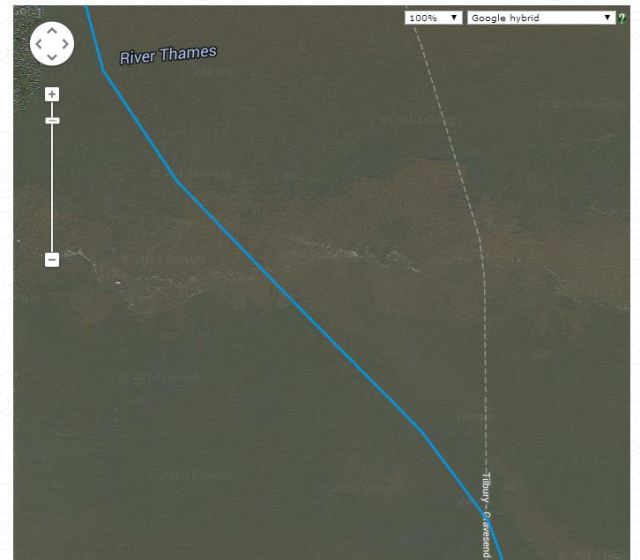 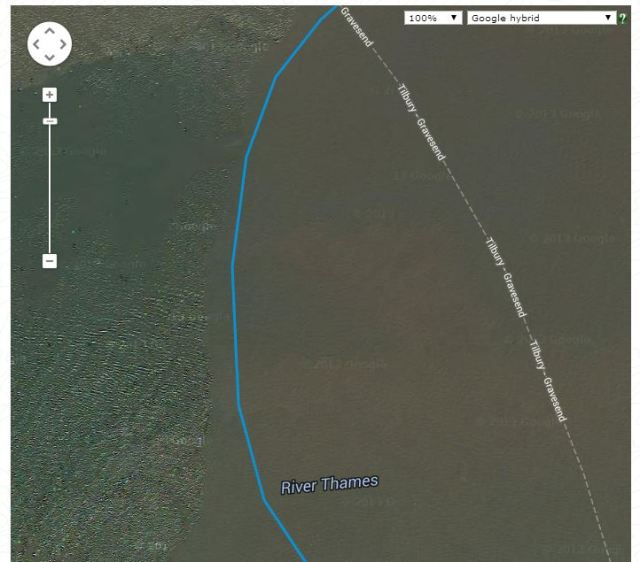 Posted on April 25, 2014 by waymarkingthesketchbook

This April, as part of the Walking Talking Project, I was able to go to IETM’s Montpellier Plenary, with its theme of Trans; tranformations, transgender and transborders.

With the parameters set by Walking Talking, we were exploring the notion of transporting the ‘inter-local’. The ‘inter-local’ is the idea that any town, city, region has its specificities, its distinctive qualities. That when artists travel to another town or city to work, that they can choose to engage in an exchange on an ‘inter-local’ level. Engaging in a dialogue between their own specific knowledge and experience and that of the city (and its audiences/artists) that they’re now working in. Inter-local exchange will be a collaborative, open-minded and curious exchange between guests and hosts.

Those of us in Montpellier as part of the Walking Talking Project, were the ‘Yorkshire Guest House’, where we welcomed our fellow international delegates into a dialogue with us, about the region of Yorkshire.

As a response to the Trans theme of the Plenary I decided to take the City Scribe to Montpellier, where I transposed a walk in Leeds that connected a series of pedestrian shopping streets, shopping ‘malls’, a market, a city square, an arts centre… onto the streets of Montpellier.

Here are some images taken from the walk through Montpellier. See Post #1 for images of the walk in Leeds. 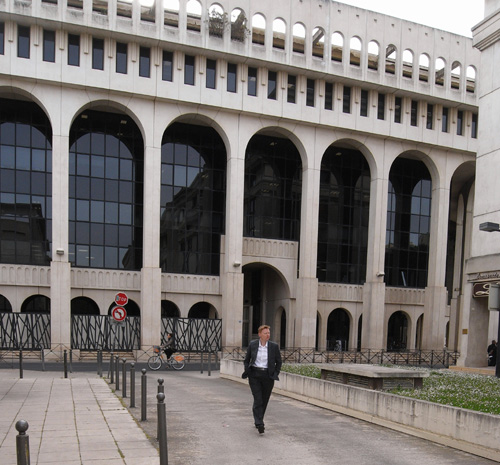 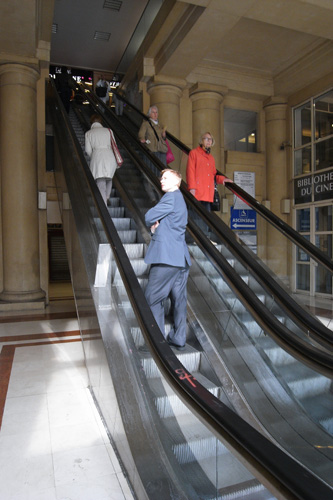 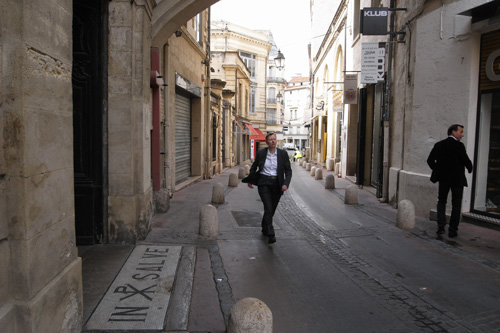 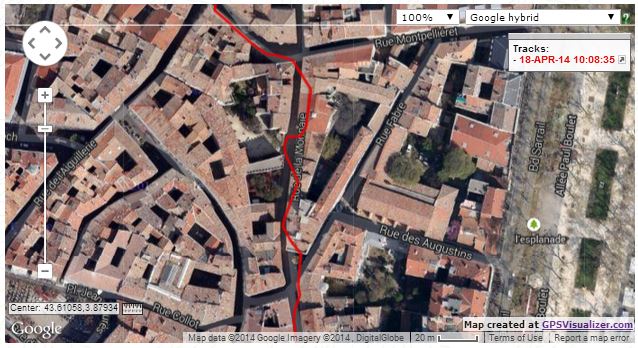 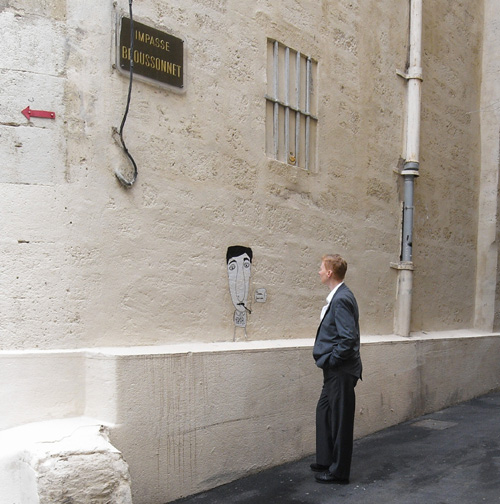 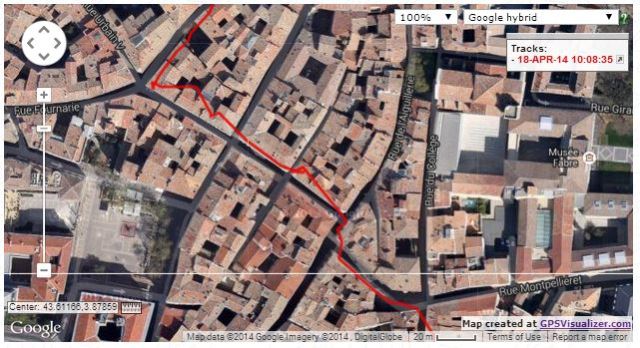 Posted on April 22, 2014 by waymarkingthesketchbook

I’ve recently been working on a new City Scribe action, whilst in Montpellier, France, at the IETM conference. As part of this project, I spent some time thinking through my motivations and approach to City Scribe. 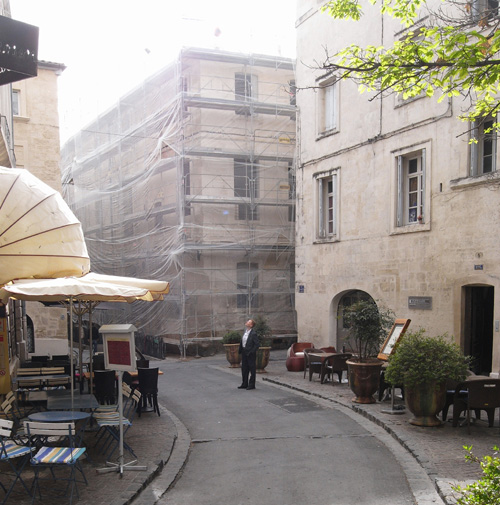 City Scribe is artistic practice as research and research as artistic practice. It is a series of interventions into city space. People (audiences) see this work incidentally/accidentally as they encounter it on the street. Sometimes the work is also part of a curated programme.

The methodological approach is centred around the performative actions of the City Scribe. These solo performances are accompanied by a gathering body of additional ‘data’ relating to these actions; GPS tracking, photographic and video documentation, writing, drawing and other mapping activities.

Posted on April 14, 2014 by waymarkingthesketchbook

The City Scribe measures, marks and reflects on the city, inviting local people to reflect on it too.

In September 2012, City Scribe took an hour-long journey through the streets of Leeds city centre. The walk linked a series of social and cultural urban spaces together. 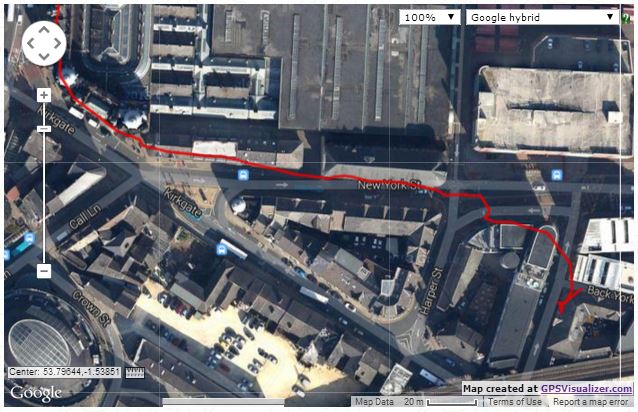 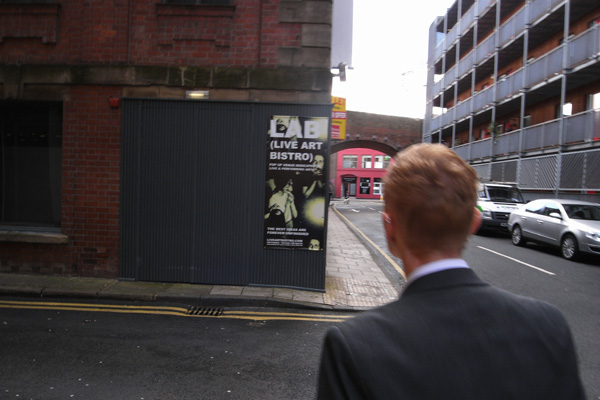 City Scribe was alert and curious about the architectural environment as she flowed through the city. 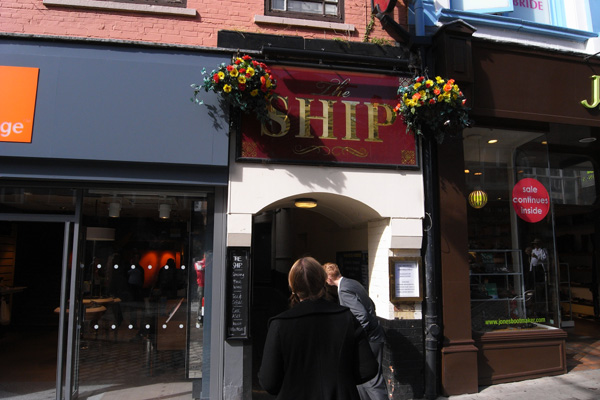 City Scribe wears the suit of the everyday male office worker, yet the performer Sarah Spanton is a woman and she challenges the perceptions and the gaze of the people around her in relation to gender, and who can occupy public space and how. 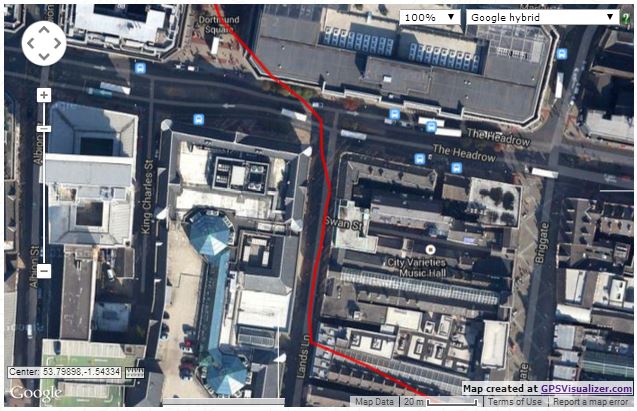 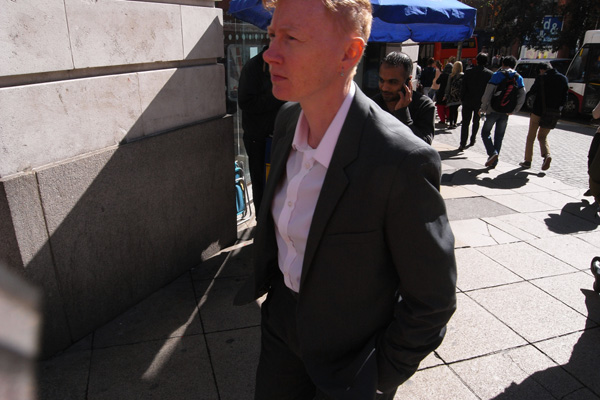 GPS data tracks were captured, mapping the journey and video and photographic footage of the walk were captured. 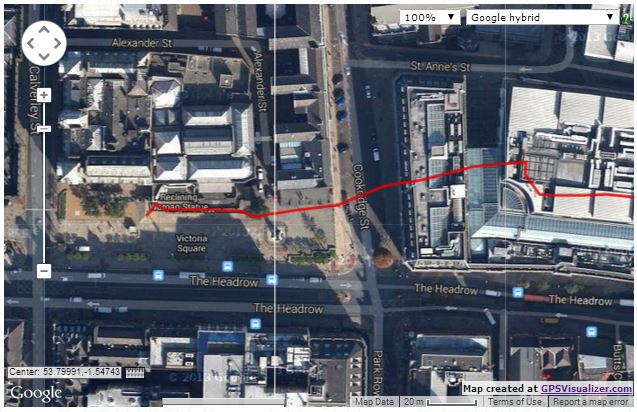